Why Did I Stop Meditating? 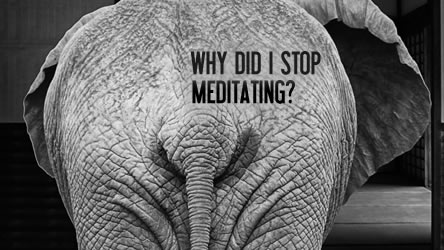 There are elephants in the meditation room. One of them looks guilty.
It’s the one that’s not meditating. At least, not as often as it thinks it should.

Perhaps you don’t meditate as often as you’d like either?

Some people say they don’t have time. Others say they’re not quite sure what they’re meant to be doing. Others do it for a while, then forget about it. There are probably dozens of reasons why a meditation practice might stall, but I’m going to focus on a deeper reason: relaxation doesn’t feel relaxing.

And you may even have heard of its opposite, the rest-and-digest response.

These are also known as the stress and relaxation responses.

Meditation is meant to trigger the latter — and naturally enough, you’d expect the ‘relaxation response’ to feel relaxing.

But it doesn’t. At least, not always.

Perhaps you’ve noticed that whenever you relax some unconscious part of you likes to dredge up everything that’s going wrong in your life? For example, you put your head on the pillow at night, and suddenly your mind is back in the office. Or you wake up at 2:30 a.m. and start worrying, as though the moon will somehow help resolve your concerns.

When your mind goes into overdrive — and you find yourself reliving moments from hours, months or years ago — there’s usually some emotional charge present.  The nervous system sees this residual emotion as a sign of imbalance. Accordingly, it triggers a maintenance routine in which all your unresolved issues — pain, hurt, miscommunication, shame and so on — get replayed over and over and over again, until you’re able to view it calmly.

It might seem like you’re just torturing yourself, picking at wounds or poking at the most tender and bruised parts of your psyche; but this is actually the nervous system trying to heal. If you’ve embarrassed yourself, your shame will pester you. If you’ve been mean, your regret will pay a visit. Anything you’ve done unskillfully will come back to haunt you. Meditation is a place to safely reflect on these errors; so that you can learn new ways of responding.

Your catalog of pain will continue until you can breathe easily; until you learn from and integrate the lessons your psyche needs to learn.

This is a completely natural process, but hardly anyone enjoys it much. And that’s why so many people stop meditating. In time, however, you can come to appreciate what your brain is trying to do, and to cooperate with it. Instead of fighting your anxiety-fuelled, worry-filled mind and its barrage of plans you can recognise that your nervous system is just trying to better prepare you for the future.

So, step right up. Get back on that horse (or elephant) and keep meditating. Don’t resist. When your mind brings something to your attention, don’t concern yourself with whether it’s pleasant or unpleasant, familiar or new, profound or pointless; just give it your best attention. Relief comes when you get to know what you fear or judge.

This course is fantastic. I am enjoying it immensely. Meditation is becoming my favourite part of the day and I am sleeping better than I have in a long while.